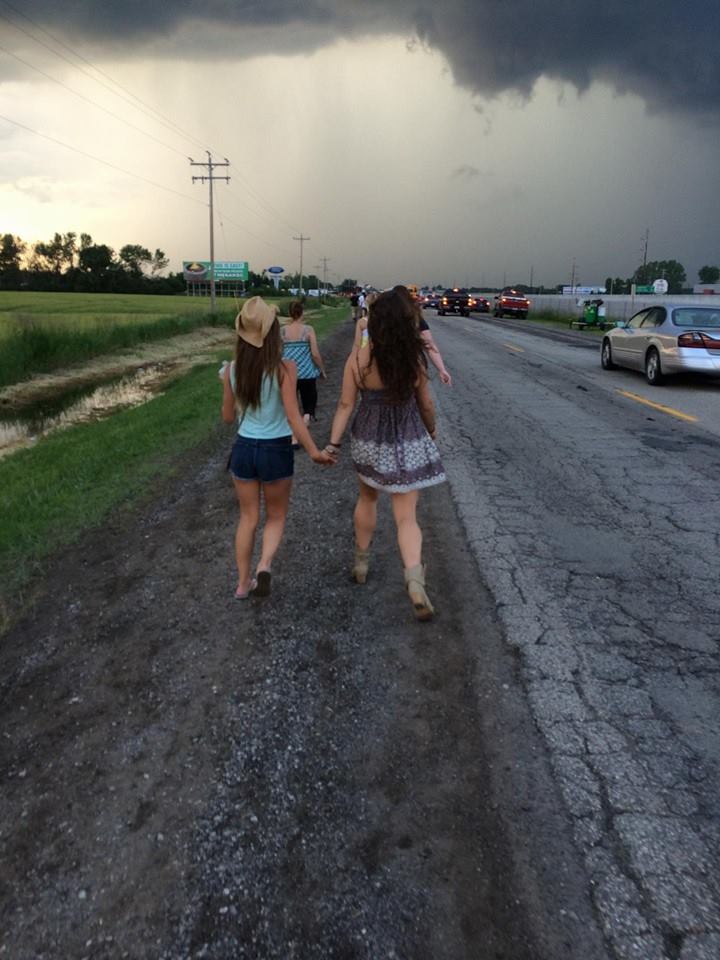 We all have this strange attraction to people who don’t love us.

Or maybe it’s not that they don’t love us, they just love us in a different way. Or maybe it’s just not going to work out, plain and simple. But we still lust after this potential. Still pray, still make ridiculous bets with ourselves, pick the flower petals, or wish on heads-side-up pennies. See, we’re always running after the things we can’t have. There are hundreds of songs about this. The grass is always greener. Hopelessly devoted. Chasing pavements.

This weekend, in a crowd of 40,000 people at a Wisconsin country concert, I found myself standing in a tent just to the right of the main stage. There was a small band playing their opening song and a man, about thirty-eight, maybe even forty, smiled at me. He had blue-grey eyes half hidden by a black beret that looked like something my fireman uncle would wear to a family Christmas party. But thirty-something-year-old smiled at me and those blue-grey eyes flickered in the tent lights.

And so I stood in front of that rickety stage and swayed my hips to the chorus of a no-name song. I felt the beat in my toes. I tossed my hair back and put my hands up. I sipped a Jack Daniels Punch and I smiled back at blue-grey eyes. He had to have been seventeen or so years older than me. No ring, but probably a father of two young children. Probably in and out of relationships, probably complicated relationships. Probably oblivious to the fact that I was watching only him.

When he played a solo on his bass guitar I smiled again, winked even, but I won’t blame it on the liquid courage. See, in that moment I fell in love with that man. With his loose-fitting button up and faded cowboy jeans. There wasn’t anything particularly sexy about him, just those eyes. The way they lit up when he played, when we made eye contact.

When the song ended he walked over to me. I introduced myself, told him I enjoyed his playing. And suddenly I was wrapped up in a conversation about music and writing and passion. A powerful moment shared between two complete strangers.

“I love looking out at the crowd,” he said, staring right into my eyes, which was more than I could say for the any of the boys I’d met at the concert that week, boys who cared more about my clothes and my chest than anything else.

“I love seeing their smiles,” my blue-grey eyes said, “When they smile, I know I’m doing what I’m meant to be doing, you know?”

I watched blue-grey for the rest of that night, skipped the headliner bands playing on the main stage, ignored the boys with twenty-two-year-old bodies, free drinks, and undress-me eyes. They were chasing me, but I was chasing blue-grey eyes. Isn’t that how it always works? My blue-grey eyes was probably in love with another woman, probably knew the ins and outs of love already, probably in love with his music, perhaps given everything up, even given up love to stand on that stage.

Maybe that’s why we chase the things we aren’t meant to have. Maybe that’s why we fall for the ones we’re not supposed to be with. Maybe that’s why we love people who don’t know how to love us in return. Because we’re supposed to be the writers, the dreamers, the thirty-eight-year-old bass players staring out into a small tent crowd of no more than twenty people, knowing that true passion can only come from within. That true love is not measured by a person, by an embrace, by even a relationship. Instead, it is a string of moments. Moments of doing what we love. The moments where we chase ourselves.