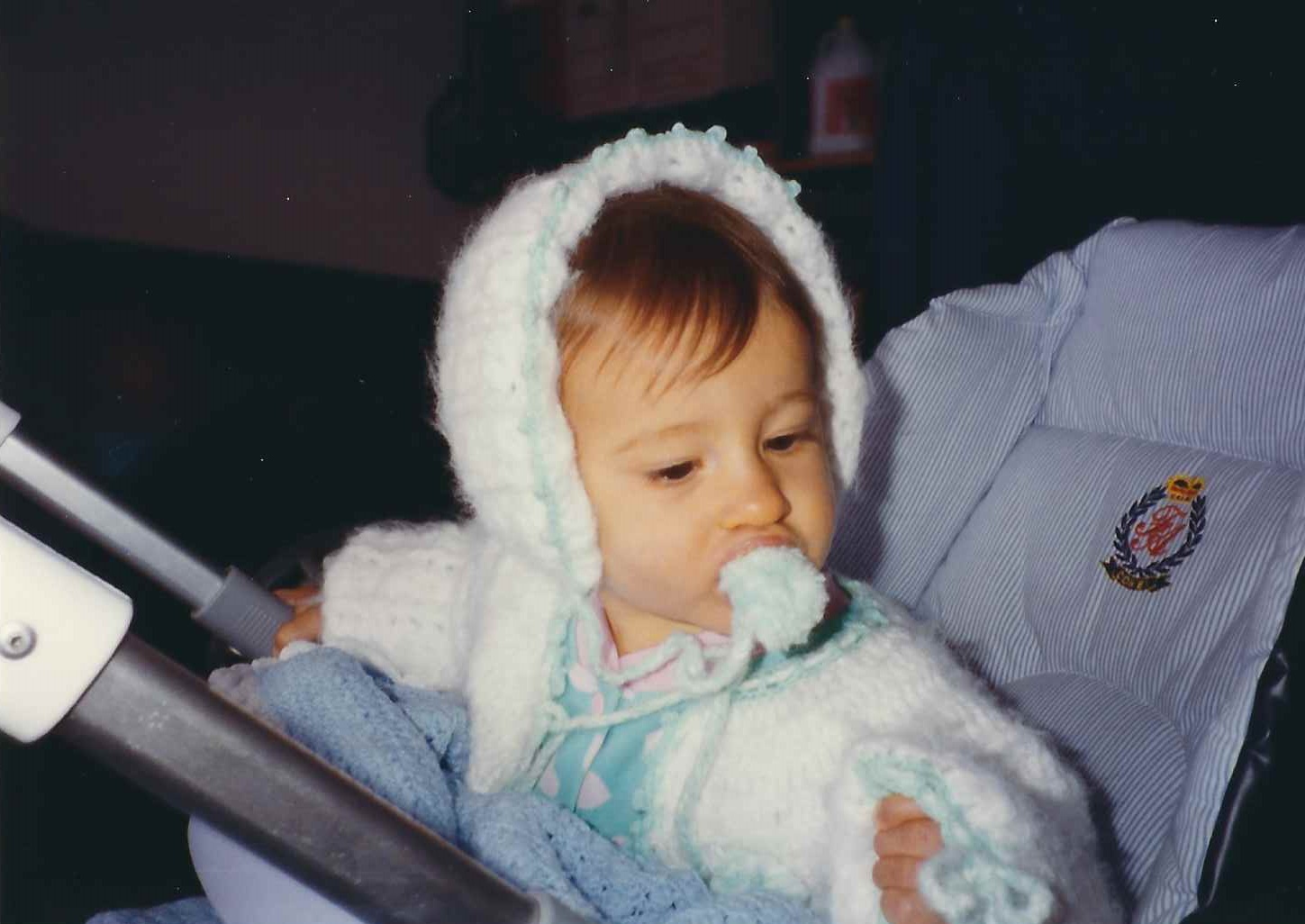 Rachael pressed her nose against the outside of the soft oak door and sighed. She could smell a dirty diaper from a mile away. Inside the room, Malorie was making a combination of cooing and crying sounds. ‘Self-soothing,’ Malorie’s mother had called it, but it made Rachael feel on edge. She wasn’t one hundred percent sure when to enter the room to change Malorie, or if this was one of those, ‘just let her calm on her own’ moments. Rachael took a quiet step back from the door and held her breath. Silence. A loose strand of blonde hair fell from her pony tail. She tucked it behind her ear. This was week seven of her part-time summer nanny position. She didn’t hate it, but it definitely made her feel reluctant about having kids, which was something her boyfriend, James, was very excited about.

Rachael took another tentative step backwards and bristled as the floor creaked. Malorie hiccupped. Rachael glanced at her watch. It was a quarter to nine, right on schedule. Zelda, Malorie’s mother, wanted her down at nine and then again at noon. It seemed like a strange schedule, but Rachael didn’t mind. It gave her an hour or so to catch up on summer homework, which she had fallen behind on.

Rachael shut her eyes and listened for any sounds. She was too far to hear the baby’s breathing, but if she was quiet enough, she could sometimes hear Malorie sucking on her pacifier–one of those ‘self-soothing’ tricks Zelda had mentioned. Everything was quiet. Rachael backed away from the door and slowly headed down the stairs.

Zelda and Frank’s house was beautiful. There was soft maroon carpet on the staircase and lining the first room to the right, a fancy living and dining area with a giant cabinet of expensive crystal glassware. Rachael hadn’t met Frank yet, but she had seen pictures. Like his wife, he was dark-haired with a smoldering smile. Zelda was something Middle Eastern; Frank was tan and Italian. They made for a beautiful couple.

Rachael glanced at the couch. The soft black leather looked so inviting, and she was in need of a nap. Last night, she and James had stayed up until three fighting. First it was about school, then the new apartment, then the bills, then work. James had started the fight when he saw Rachael’s progress report stuffed in-between an empty carton of milk and a Stoffer’s Mac and Cheese box. She was failing two of the four classes. James was paying for half of her schooling as part of their agreement, so he was angry, and rightfully so. Their agreement was based on Rachael’s uprooting from Wisconsin to follow James to Florida. His real estate business was doing well, and last year’s move was good for him. And so Rachael had agreed to go with him, as long as she could continue taking graduate classes. However, failing wasn’t part of the agreement. Rachael knew this. She wasn’t sure why she was doing so poorly. She had always wanted to become a reading specialist, to help children catch up where they were falling behind, to teach them to sound out words, to make them learn the difference between a protagonist and antagonist. School had always been a priority for her, but she felt so far from home, so lost.

Rachael resisted the urge to cuddle up on the couch and walked into the kitchen instead. On the black granite counter was a top-of-the-line baby monitor, some designer brand that Zelda had mentioned in passing. It was complicated, covered with obscure buttons Rachael was clueless about. All she concerned herself with was the top right knob. She switched it to ‘on’ and waited for the beep to let her know it was ready.

On the counter was her backpack, well, James’ old backpack. He had tried to buy her a new one several times, but she felt it was a waste of money.

“James, what’s the point? I only have two semesters worth of classes. Besides, navy is a neutral color. It goes with everything.”
James furrowed his blonde eyebrows and shook his head. He was tall and muscular, with golden hair and a thick golden mustache.
“Look, Rach, you don’t have to be so worried about money, I—”
“We don’t have to worry? Do you see these bills?”
“I’m handling it.”
“Oh, are you? Because they’ve been sitting here for over a week.”
James sighed, “Babe, I’ve been busy with work. You know that. Look. Everything will be fine. I won’t buy a new bag. I’ll pay those bills and we’ll start saving up for our family.”

Rachael pulled a chair to the table and wrinkled her nose. The amount of catch-up work she had was overwhelming. That was just it, she thought, one thing goes wrong and suddenly you’re in over your head. She loosened her ponytail and ran her hands through her blonde hair. She was young looking, always getting carded at bars and restaurants, even though she was just shy of twenty-six. When she stood next to six foot three James, she looked even younger, all one-hundred and ten pounds of her. She had a plain face; freckles outlined her nose and cheeks. She had thin pink lips but crystal blue eyes. James called them her fairy eyes.

Rachael pushed her books forward, clearing a small space in front of her. She grabbed a notebook from the top of the pile and started doodling. First it was a circle, then another tiny shape in the center, like a lima bean with a deformed side. She shaded the circle, drawing small extremities from its oval shape, something that looked like tiny hands and tiny feet. The larger circle extended, growing out and up until it was a picture of a woman with an open stomach. The stomach revealing that tiny lima bean, a baby. Rachael threw her pencil down and tears filled her eyes. She leaned her head in her hands. The picture had come almost involuntarily, this mother, this child. It had been seven weeks since her last period. Rachael had known since the first day she missed it. She never missed. It wasn’t that she didn’t want a family, though she knew that’s how it must seem to James. Whenever he brought up the subject she balked, started talking work, or school. When Rachael took care of Malorie, she would imagine that Malorie was her own baby. She would clutch Malorie to her chest, whisper ‘I love you’ into her dark brown curls. Sometimes Malorie would smile, but sometimes her tiny face would scrunch up and she would begin to cry. It was those times when Rachael knew she wasn’t ready.

In bed a few nights ago, James had rolled over to her and pulled her to him. She woke to his warm breath on her neck and it gave her goose bumps.
“James.” she whispered.
He sometimes moved and talked in his sleep, babbling about problems at work, or sometimes, on good days, he would reveal secrets. It was in these half-asleep moments that Rachael learned that he loved her half-moon birthmark on her left shoulder and the way her nose wrinkled when she was thinking.
This time James seemed more awake.
“Baby?” His voice was quiet, but husky.
“Yeah?” Rachael glanced at the clock on the bedside table, the one from her college dorm room, painted an obnoxious black and pink. It was almost five-thirty, James’ alarm would go off at six.
“Sadie, if she’s a girl.” James said in a trance-like voice.
“What?”
Rachael rolled over to face him. His eyes were closed, one arm draped loosely around her frame, the other tucked underneath his chest.
“Our baby,” he said, almost too quiet to hear, “Sadie, if she’s a girl.”

Rachael looked at the sketch again. The woman’s frame was stretched, stomach swollen with the extra weight. From the baby monitor, Rachael heard a sniffle, hiccup, then a small cry. She pushed herself away from the table and headed back up the stairs. The door was still shut, sounds muffled by the wooden surface. Rachael leaned up against the door, pressing her ear to it. The room was silent. This was one of those moments where she was the most unsure. Had Malorie startled in her sleep? Or would she commence the full-blown sobbing? Rachael took a deep breath and waited, hand hovering over the doorknob. There was the rustling of blankets, but other than that, Malorie was silent. Rachael imagined her tan, chubby body spread underneath the tribal-pattern blanket. She could see the folds of Malorie’s tummy fat, her thick dark eyelashes, button nose. It was incredible to Rachael how Malorie could blink, reach up to grab Rachael’s hair, stack blocks on top of each other. She was a miniature person: a tiny body, a growing brain.

Malorie made a sniffling sound, then sucked in gulp of air and began to cry. Rachael sighed and turned the doorknob. From the opening she could see Malorie sitting upright, eyes red and puffy, and the pacifier fallen from the crib, just out of reach. Rachael stepped in, picked up the pacifier, and stared at Malorie for a moment. Her mouth was opened wide to support her full-blown wails.

“Come here,” Rachael sighed as she lifted Malorie and carried her to the changing table, the dirty diaper stench filling her nose. “I know just what you need.”