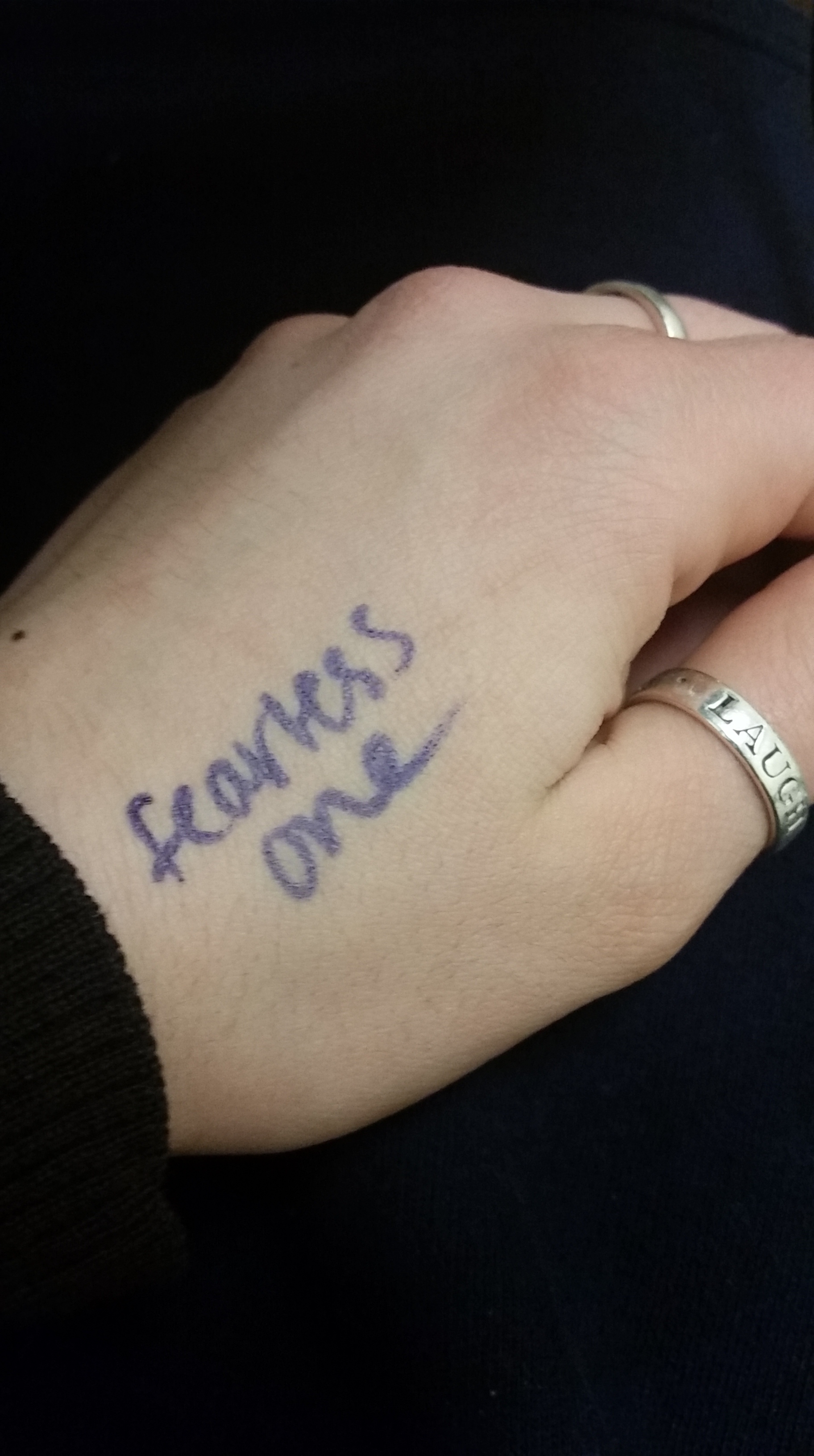 Fearless. Fearless one. The words drifted into my mind subconsciously. Being a writer, this was strange. I was always thinking, always processing, always something on my mind. Words. Words. Words. I didn’t think I could shut it off. But I had, just for a moment. For a single minute, I had shut off the constant to-do list, the cravings for Frosted Flakes, my itchy big toe, the nagging tiredness around my eyelids.

Everything had gone quiet and then I heard that word: fearless.

Every Monday night at 9, my college hosts Like Fire, a non-denominational, open-to-everyone worship and devotional time. My senior year was the first year I’d attended. Being a busy bee the majority of my weekdays, I’d always scheduled myself to work on Monday nights. But my motto for my last year of college was to do everything and anything I could. And so I became a regular Like Fire attendee.

I still remember the first night. I was unsure about going, didn’t really know everyone, wondered if I looked a little hypocritical, having skipped it the past three years. But then I heard a fellow student give a testimony. She sat at the front of the stage and clutched the microphone between white-knuckled hands. She was trembling. And before a room of friends, yes, but also complete strangers, she told the story of her sister’s suicide attempt.

I still remember exactly where I was sitting—front row, third chair from the left. I remember my sweatshirt, a purple Waldorf Warrior Baseball hoodie. I remember the way my heart reached out to this girl, though I didn’t even know her name. And I remember how deep her words hit, as I imagined my own sister, four-hundred miles away, brushing her golden brown hair in her bedroom mirror and waiting for a text message from some lousy boy. That night was the first time in a long while I really felt connected to God. It was as if God had reached out to me personally, and said, Hey, this is important. You need to be here.

That night was all it took. I became a regular.

Flash forward eight months. This past Monday I came to Like Fire right from work, just a little frazzled since I’d missed the worship rehearsal—I’d since decided to join the band as a lead singer—but ready to let go and focus on God.

The speaker of the night was one of my professors. I’d known from day one she was a Christian, but she wasn’t too open about it in class, and rightfully so. She was beautiful, in that spunky, positive-energy-filled type of way that teachers can be. She cracked a joke as she sat down, her brown framed glasses resting on the tip her nose.

In one of our first class sessions she mentioned her past, a terrible past, one clouded with both sexual assault and abuse. I was surprised as she began to talk about it openly with the Like Fire crowd, saying how those hard times almost destroyed her, yet were the moments where she became the closest to God.

“What’s your name?” she asked the group collectively. Silence, for a second, then a cacophony of voices as everyone stated their birth names or nick names all at once. “Good, now have you ever thought about the name God has for you?”

I was sitting in the far right sofa chair, the one that was the closest to the stage and the least distracting to slip into when she started speaking. I cocked my head to the side and contemplated the idea of names. My mother had always told me that my name was unique. ‘Of the sea,’ it meant, and was special because it was spelled with one ‘s’. But a name God had for me? I hadn’t ever thought of that.

“That was one of the questions I asked God when I was in prayer during one of my darkest times,” my professor said. The laugh lines of her cheeks were straight and serious, but her eyes still had a slight glimmer to them—a testament to how strong her faith truly was.

“I quieted my mind and I asked him. I said, ‘God, what’s your name for me? And do you want to know what he said?” She looked out at the crowd, scanning faces, the glimmer in her eye playful and teasing. “I heard the words ‘Beautiful One’.”

A shiver ran up my legs. Having known her story, and knowing some facts about the trauma following sexual abuse, I knew that those words weren’t something she would have said to describe herself. She smiled at the crowd again, making eye contact with every person. “‘Beautiful One?’ That’s the last thing I would use to describe myself. When you go through assault and abuse it hits to the core. You lose your outside beauty. But you lose your inner beauty, too.”

I looked down at my slip-on Converse gym shoes, then back up at my professor. She was sitting straight on the little wooden stool, her chin raised and smile stretched across her face. I wondered how those words came into her head, how she knew that was what God wanted her to hear. How she knew, so distinctly, that those were his words, rather than her own. Rather than what she wanted herself to believe.

Her voice interrupted my thoughts. “I want you to do this on your own,” she said, making eye contact again. “I want you to close your eyes, quiet your mind, and just ask God ‘What’s your name for me?’ And let yourself listen.”

She continued to speak for a few more minutes, but I was lost in my own thoughts. As everyone split into small groups, I stayed rooted in my seat. My head was jumbled. I wondered how someone could know God was speaking to them. I wondered if that was real, if I tried to quiet my own mind, if I could hear him.

I closed my eyes, hugged my legs to my chest, and bent my head forward to rest on my knees. Okay. This was it. Close my mind. Stop thinking.

At first everything was a rush—I thought of the unfinished dishes in the kitchen sink, the poster project that was due on Wednesday, hanging out with my boyfriend in an hour, the maxi-skirt I was wearing to class tomorrow—then suddenly nothing. Blank. Black.

In that moment I was surprised. As a writer my mind is always running, even in present moments, narrating my movements or trying to make sense of my wandering thoughts. But this was silent.

God, what is your name for me? I said those words in my head and willed myself to listen. Instantly, I started thinking about what my name could potentially be, but as I started thinking, it was as if my mind hit a block. I tried to form describing words in my head, but I couldn’t. I literally had nothing in my mind. I just saw darkness. Quiet. And then suddenly, fearless.

The word popped into my head—it was as random as thinking of Cheetos or a dictionary—something totally unrelated and where the heck did that even come from? Fearless? I was the opposite of fearless, especially when it came to the biggest, current stressor in my life: softball. Since my season started I was living in fear: the fear of having a terrible senior year, the fear of striking out, the fear of pitching poorly, the fear that it would all be over before I had the chance to have fun. I was the opposite of fearless.

I shook the thought from my mind and willed myself to think of something else. But then it struck me. This word, this word that came from nowhere and was absolutely the opposite of my own heart, was God’s name for me. Fearless One.

I took a breath. Wow. This wasn’t a thought I had for myself or something I felt defined me in the least. It was God’s word, God’s name for me. His plans to make me fearless—of softball, of relationships with other people, of making a true difference. Fearless One.

I opened my eyes and felt a sense of calm, nothing like I’d ever experienced before. I walked over to a small group and sat down, soaking up the words and prayers, really feeling God’s presence near me.

It was a fascinating thing, realizing that God had spoken to me, that this was actually real. No, I hadn’t heard a deep manly God-voice in my head, and an angel hadn’t suddenly appeared out of the sky. Nothing crazy like that. Rather, just a sense of this word, a word that encouraged and strengthened my spirit.

Later that night, I took a permanent marker from my dresser and wrote the words Fearless One on my left forearm, alongside the inner bone that faced towards me, just above my wrist. The next day, I glanced at those words during pitching practice, when I started to feel a loss of confidence and some anxiety slipping in. It was strange, seeing those words written on my skin, mixed with softball dirt and sweat. Those words were a beautiful branding, not of who I felt I was, but who God already knew I would become. Fearless One.