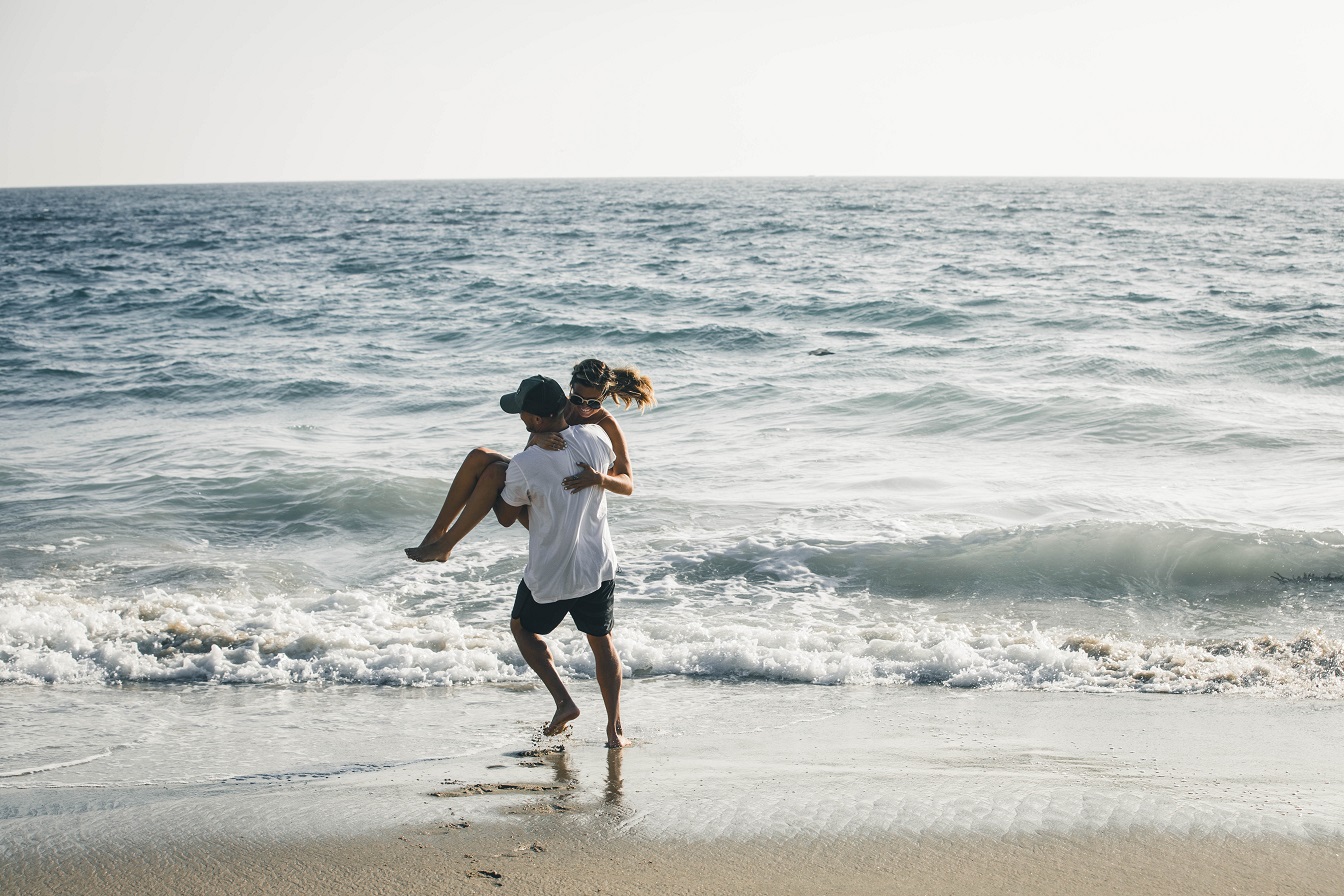 “I love you,” he says, simply, shrugging his arm over my shoulder and pulling me closer to him. We’re sitting in the middle of the beach, dogs kicking sand wildly with their feet and children laughing all around us, an airplane soaring overhead. I remember just weeks ago when I was the one in the sky looking down at this exact shore, smiling in my window seat at the dogs like mini black and brown and white ants, chasing after Frisbees and jumping through the waves. They looked so happy from above; their lives so easy. Just watching them made me want to cry at the simplicity of it all.

My boyfriend turns towards me and I look him in the eyes; they’re a crystal blue-grey that compliments the ocean waves. I always thought blue eyes in men were mysterious, dangerous even. I was always cautioned that eyes were the windows to the soul, but to be careful about what stories they may be hiding. These eyes hold a past, but they tell a story of man who no longer walks in those same shoes. These eyes hold mine and I see the cloudy sky, the seagulls, the dogs, the effortless smile on my face mirrored back to me.

“I love you too,” I say, leaning my head on his shoulder. He smells like salt and cologne and skin and other scents I can’t quite put a name to, I only know that they are his. And simultaneously mine.

I press my face into the curve of his shoulder, close my eyes and inhale deeply, willing myself to hold onto this scent, even after he’s gone.

The trouble with our minds is that we can only hold onto memory for so long until, despite our best efforts, the senses fade. And we’re left with what we can create in our own heads, mere romanticized reflections of the real thing until we can hold that person in our arms again.

He shifts his weight and leans back on his palms. I follow his gaze to his dog, the beautifully brindled Pitbull racing alongside a Lab mix in an effort to show his dominance. An unconscious smile drifts across my boyfriend’s face and I can’t help but smile in response. He catches me, and I blush and turn away, watching the nearest wave crash against the shore.

There are people yelling, dogs running at full speed after tennis balls, the splashing of waves, barking, and rumble of cars on the distant highway, and in all of this craziness I can’t help but wonder what we look like from above, from an airplane where a girl, my age, is also flying across the country to see her long-distance boyfriend, pressing her nose to the window glass, watching the flurry of motion, and perhaps longing for her own place in the mess.

My boyfriend’s son starts yelling and chasing after his dog, the sand kicking up around both of their feet. I watch them as they sprint past, watch all the people around me in various stages of life and happiness and suddenly realize that I am one in the mix of them. I am one of the specks barely visible from 30,000ft.

I turn back to my boyfriend, study the line of his jaw, the stubble just poking through his freshly shaven face. I will myself to memorize his smile, the sun poking through the clouds, the sounds of his son’s footsteps and the barking of his dog—all slivers of a world that’s slowly becoming mine, regardless of the plane rides between us.

I close my eyes and lean into his shoulder again, my heartbeat steady and slow. Perhaps I can’t make this moment last forever, can’t write it into my memory permanently, but I can try. I can remember the softness of the sand between my toes, the sun on my bare face, the dog slobber and his son’s laughter and ‘I love yous’ whispered into the late afternoon breeze.

Perhaps I can imagine what we look like from above—a little family—so simple, so easy, so right.