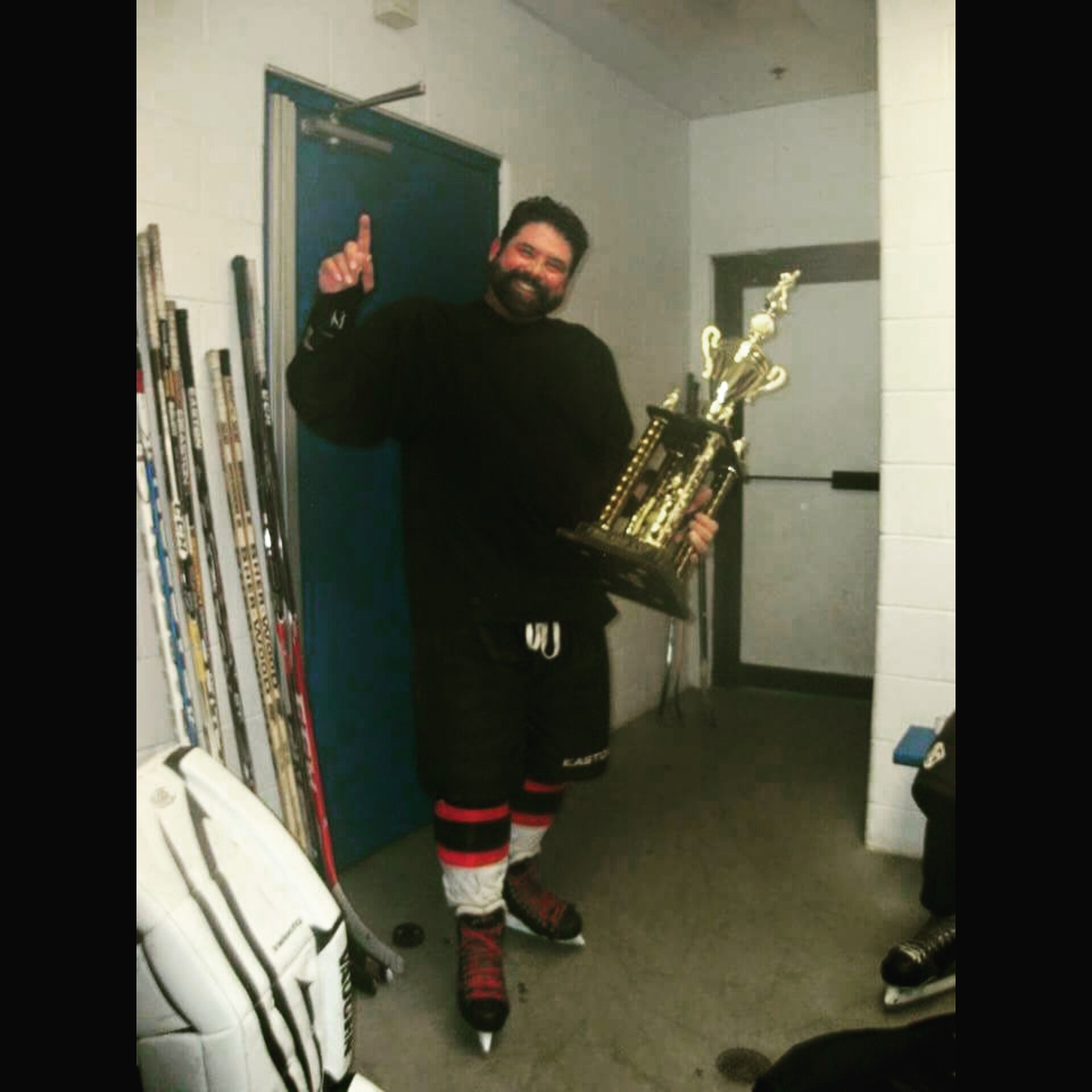 I have always known two versions of my father:

#1- Pleated pants belted just under the stomach scar from his motorcycle accident as a teenager, polo shirt tucked in, hair wet in an attempt to slick it back, glasses.

Both of these versions make me proud—they define who he is—a business man and the handy, hardworking (though sometimes slightly embarrassing) dad. But last night I saw my father on the ice for a hockey game. And I saw a completely different version of him. A version that made my heart swell with pride more than it ever has.

When I stepped into the Rocket Ice Arena, a rink I’ve been to several times before as a teen chasing boys and as a child actually trying out for an all-girls league, it felt and looked the same as it did in high school: cabin-wood floors and ceiling beams, a center check-in area, concessions stand, two glass viewing areas, and that pungent, sour milk/sweat smell that only hockey players can generate.

My father was on the rightmost rink, and he was the best-looking one out there—black skates with red laces, white socks with red and black stripes in the middle, black shorts, red and black jersey with white trim, black gloves, and a black helmet with red accents. He headed out onto the ice for warmups, skating and stretching, moving his stick around, loosening up. I watched him from just behind the viewing glass. On his first skate around the rink he stopped by my window and smiled. It was almost like he was a little kid again, winking at the girl who was there to watch him play, fist pounding with old buddies, chasing the puck around the ice.

When the game started, he was right in the heart of the action. His first shot was no more than a minute into the game. It was a breakaway; his stick flew back and forth across his body to propel him forward, his knees were bent, body leaned over, eyes squinted in determination. He faked left, then his stick cracked against the ice—slap shot. It just missed.

I watched him turn, pivoting away from the net; it was a split second motion, a sheet of ice flying up around his skates. I swear he must have played the first five minutes of that game, which is actually a pretty long time for hockey, and was back in only a minute later. I had looked away when he first went on the bench; I hadn’t wanted him to think I was pitying him for being tired. But I had to wonder, when he was back out after only a small rest, if he was trying to impress me. After all, I was the only fan in the whole place. Since the older men’s league wasn’t a priority compared to the more competitive leagues and club practices, they were given the late night times—thus no visitors. So I had to wonder if he was pushing himself even harder, wanting to make me proud.

From behind the viewing glass, I could just make out his voice—it’s always like that with people you love, you can hear them even in an arena with twenty other guys. I could hear him shout as he got closer to the net, as he tried to get the attention of his teammates so he could pass them the puck. I watched him gain speed, moving the puck back and forth around opponents, tricking them with his fake-lefts, fake-rights. I watched him move; it was almost effortless. It reminded me of when I run or when I lift and feel the pull of my muscles. It’s beautiful that I have that connection to my father—muscles, strength, athleticism.

He made five goals, about six assists that night. And he fell once. After he fell, he avoided eye contact as he skated past my spot behind the viewing glass. And as he skated by, eyes forward, I felt this strange sense of protectiveness, like I wanted to save him, keep him from falling again, make sure he was okay. It was almost a role reversal, and maybe he could sense it too. It’s the parents who should be nervous, wanting to save, to break every fall. It scared me, in that moment, to realize that one day my father would need me to take care of him.

The funny thing about seeing another side of someone is that you start to realize there’s so much more to people that even those closest to them don’t know. Watching my dad play was seeing him doing something he truly loved—a side of passion that was new to me. I’ve seen my father cry on the day of my high school graduation, when he and my mom got into it pretty good, or when he read a really poetic hand-written birthday card from me. I’d seen him be proud after fixing our family washing machine, after trimming the trees, after fixing car brakes. I’d seen him laugh along with my sister, or laugh at a joke in a movie. But this passion on the ice, it was new to me.

In that moment, sitting just behind the glass watching him push himself, watching him skate down the rink again and again, sweat dripping from his forehead, there were a thousand things I wanted to say: how I love that he still does what he loves, that he is strong and agile and funny, that when he dyes his beard much darker than his hair he looks like a bear, that his cross-eyed faces and embarrassing antics in public only half humiliate me, and that in this moment, watching him shoot and laugh and chase pucks around with other 50+ year old guys on a Tuesday night, I couldn’t be more proud.